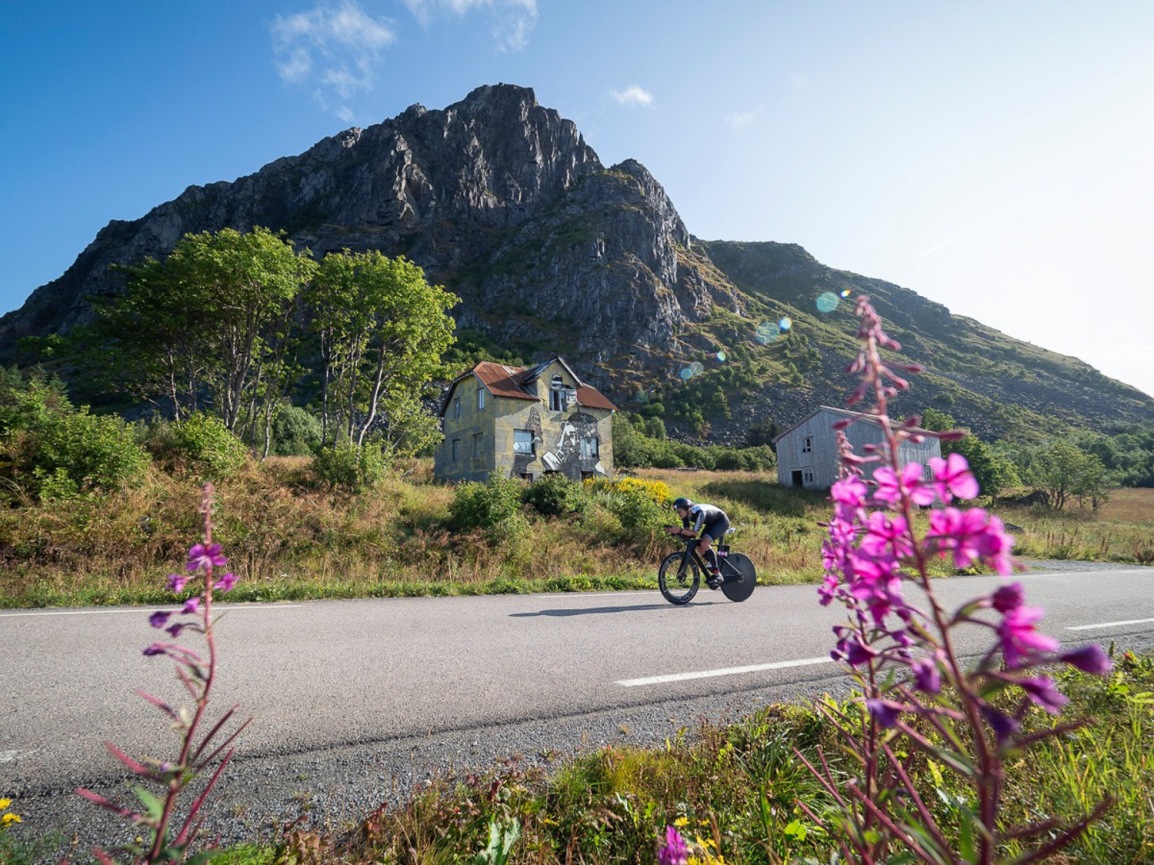 It was a nightmare. The preparations for Lofoten Triathlon Extreme distance was less than optimal. Less than 2 weeks after Norseman and using the time between to work one week continuously 12 hours nightshift. The few days in transit was used to unpack, wash and repack. I was sleep-deprived, unprepared and stressed out when hitting the bed at 10 PM before the race. Unfortunately, the circadian rhythm of a nightshift worker kicked in, I was just not able to sleep. After trying every trick in the book I finally got nailed it. The clock was roughly 2 AM. 3 AM the wake-up alarm went off. Never before have I been closer to DNS and go for plan B, the Olympic distance race on Saturday.

After not swimming for nearly two weeks I was absolutely certain there was no magic happening in the water. While doing swim specific strength training for 30 minutes every day while on the oilrig where I work (no, I am not allowed to swim in the sea surrounding it) does help hugely on maintaining muscle-specific strength, it has its shortcomings. I felt a bit sluggish and that it felt harder than normal to turn the arms. As I might expect.

The depressing thoughts from the night before vanished as the sun rose. My spirit was high. The water was crystal clear and perfectly still. Due to the combination of relatively low water temperature at 15 degrees and 11-12 degrees in the air the swim was shortened from 4000 meters to “only” 3000 meters. Bonus! I quickly ended up as second of the pack and got on the feet to the guy in charge. His swimming was straight and even, which is great. However, his kick was very strong and high, making a water fountain with every kick, like swimming into a small waterfall. For that reason, I changed from staying on his feet, hips or just on the side.

I was not too serious about it and surely did not want to push in on the swim, when I had absolutely no clue how well the body had recovered and would feel throughout the race. I loved that the swim was a two-loop course at it made it easier to keep track and set smaller goals. Coming out of the water a few seconds after the man in charge was a blast. Maybe my most comfortable swims ever and the time of 44 minutes was not horrible at all.

The big question among the participants before the race was clothing for the bike. 12 degrees and a slowly rising sun. I was very indecisive myself and had a wind vest and bike gloves in my transition box. The heat I got from the swim, where I used a neoprene balaclava to avoid being cold, made me decide to only put on thin wool socks and nothing more.

For the first 10 minutes, I was really happy with my choice. The next 10 minutes I had serious doubts if it was a good choice at I got cold. After passing the road that leads to Henningsway it became milder and I yet gained confidence in my choice. Do you know how much aero penalty you get from a wind vest??? I actually don’t know either but can imagine that even a tight-fitting one will cost you at least 5 minutes over the 196 km long bike course.

Did I mention that the weather was great? It was better than great. It was perfect. Not a cloud in the sky or a breath of wind. Yet, cold enough for my engine to run one hundred per cent. Of course, my engine was not running optimally. How do you recover, build and taper for extreme distance triathlon in less than two weeks? You just don’t.

For that reason, my goal was to start easy and see how the body responded. Simply said, just enjoy the day. First I got goosebumps on my arms due to the cold weather. Then it got maintained by the scenery. The Lofoten archipelago is arguably one of the absolutely most beautiful places in the world if the weather is good. The weather is no guarantee, but we had Thor, the Norse god of Thunder on our side. He was nowhere to be seen.

Describing the beauty in words is a challenge. You are surrounded by mountain and peaks, but not riding over any of them. The clear water is coloured by the seafloor beneath it. Often blue but what truly blew me away was the intensity of the green. As if the seabed was filled covered with emeralds. This was the reason I went on with this “suicide-plan”. Experiencing Lofoten at its best.

My lack of peak fitness and recovery status made me certain that nothing magical would happen on the bike, either. Still, I started at 250 watts (not 280-290 like usual) and expected a decline. It dint happen. It felt just comfortable and solid the whole way. And while not being a crazy high number in terms of power to weight rate (3,6watt/kg), you can ride fast on that with good aerodynamics. In is it something I can, its aerodynamic.

It was a ride in solitude. My father and younger brother had taken the 20 hour(!) drive from Oslo to watch me and experience Lofoten. It was very practical as they could watch Jonas while I was racing. It was also very nice to see them on the course once in a while. The Lofoten based photographer Kristin Folsland (check her out on Instagram – @kristinfolsland), was also often to be seen. Probably sent by the organizers as a disguised shepherd ensuring that I rode the correct way. I am known for riding the wrong way in this race, and this time was no exception. I only lost 6 minutes. And what does 6 minutes bonus riding do in such a nice place in so nice weather?

Coming into the “capital” of Lofoten, Svolvær where Start, T1/T2 and the finish area is was nice. 200km on the bike was enough and it was nice to see people again.

As for the swim and bike, I was clueless about how the run would feel. Initially, it felt tough getting into the pace and I struggled to get a good and relaxed rhythm. 3:42 the watch said after 1km. That was probably the reason for my feeling of things being hard. I was running way too fast. I settled down and ended up at 4 min/km pace. Not bad at all for running with a relaxed feeling.

The run is exceptionally long. Not in the distance. 45 km is only 3 km more than normal and there are no huge mountains to climb. It’s the un-runnable terrain that makes it long, measured in time. Running flat out the first relatively flat and fast 25 km will punish you when you meet the trail. The first 15km when on 1hour and 20 sec. Awesome!

I was getting seriously tired. Not as in muscular fatigue or low on energy. Sleepy is a better word and I nearly dozed off at moments. As Matthew Walker learned me thru his book Why we sleep; you cannot cheat sleep. The brain needs it to function and start with short micro sleeps. I was getting at this stage.

Intentionally I had not been taking any caffeine until now. It was time to ramp up the intake with every gel being a caffeinated version. I did not feel it helped, but its highly likely it did. At least slow down the downward looping sleepiness spiral.

Reaching Haugen Farm, the place where you enter the trail is a huge milestone. There is a chair waiting for you and a legit reason to sit in it 😀 There you can change to terrain running shoes, which I recommend you do. I can also completely overdo it on snacks from the aid station, which I recommend you to not do. A small bun with Nugatti, the Norwegian version of Nutella was my treat, and I kept going. Pancake with bacon was really tempting but I don’t think the stomach would agree.

The first part of the trails is easy and fast. Then it starts to go uphill and you lose fast while keeping easy. When you reach the plateau it’s not that easy, you get back fast. I had forgotten how fun this part was to run. I took short stops when crossing the small water streams pouring ice-cold water above my head and body. Heaven!

After being in heaven for a while I remembered why I did not remember the very enjoyable part. You get to the section, which is neither easy nor fast. It’s so technical that you cannot find a good rhythm. Like driving your car in only the first gear while randomly pumping the clutch in and out. You see the minutes per kilometre reaches 15, and progress is slooooow.

When you finally reach the point that you can see the finish line, or at least the city where the finish line is, the downhill starts. It is down right the worst. Steep and impossible to run fast, at least in the state I was in. 15min/km also in the downhills(!). A fresh body and mind would have been flying down there. Kilian Jornet would probably have made it in a third of the time or less.

Reaching the bottom of the hill is great. Its more than one hour since I had done anything looking like running. Stretching out the legs in easy running trails is a treat. Passing a small sand beach made me seriously consider taking a short bath, but I had no clue where my closest competitor was behind me. Reaching the last aid station on 36 km I was told I had at least an hour lead. Then I treated myself with a coke, two Smash chocolates and a handful of potato chips.

The last part had begun. Running a few kilometres on the easy trail before reaching Tjeldbergtind with its 349 height. It’s not much, but sure enough. Enough for the body at this stage. Enough to get an absolutely magnificent view over Svolvær and the mountains and sea surrounding it.

Walking up it was just magnificent. Taking short brakes to truly breathe in the air, view the surrounding and pick a few blueberries. The finish at Svolvær was surreal. It was absolutely packed with people including the Royal Guard chiming their bells. The mood was ecstatic. Most importantly, Jonas was waiting with a flag and run the last 100meters with me. He was running as fast his little legs could carry him and was super happy to cross the line. As was I.