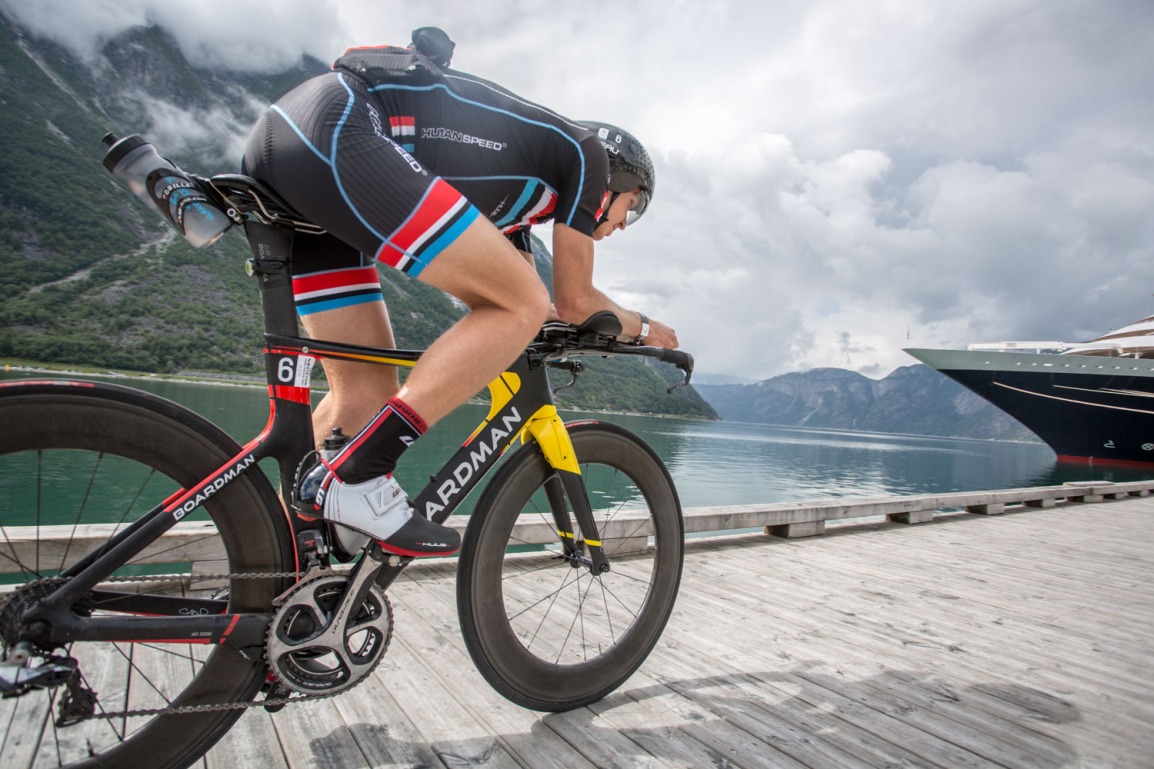 I try hard to optimize my aerodynamics and have a blog series about it. Read part 1 of my fight against the wind in the link.

Challenge Almere was not the best race I have ever done, and far from the potential I know my body can do. Despite that, the swimming was the fastest I have done compared to the fastest swim times with a loss of “only” 11 minutes. It was also the fastest 180 km I have ever ridden with 40,2 km/h in average. How can I then say it was far from my potential? To ride the Challenge Almere route in 4:28 is by no means slow (not a stellar time for a pro either), but doing it with only 232 watts is extraoridinary.

If we will try to simplify very complex physics/mathematics we can calculate my average aerodynamic resistance and my estimated riding time if I had been cycling like I did in Lofoten Triathlon, where I had my strongest ride ever only three weeks before.

To help me calculate I use the Interactive power model made by Steve Gribble. I plotted in the weight of me and Mr.Boardman and left drivetrain loss, air pressure and rolling resistance as default. Since I know the time, distance and therefore average speed in combination with my average power I could adjust the drag coefficient to fit my speed. 40,2 km/h with 232 watt left me with an average CdA of 0,214 (!).

To most people a CdA of 0,214 does not brings out goose bumps. With no reference the share number does not say anything. Since I had my own project on aerodynamics in 2013 and went to the R.J. Mitchell wind tunnel in Southampton 0,214 actually have me goose bumps. I had 34 runs in the tunnel and the absolutely lowest CdA I measured on my Specialized Shiv with Zipp 808 front, Zipp Sub-9 rear and my head glued to the aerobars in 0 degrees yaw was 0,208. The same set up in 7.5 degrees side wind was 0,230. Obviously not any position I could keep permanent due to lack of sight. To average 0,214 in a real course with some wind, corners, aid stations, drinking, eating etc. is no short of amazing, and surely world class aerodynamics in the triathlon world.

The aerodynamics is actually so good that if I had performed like I did in Lofoten with 264 watts in average the first 4,25 hours it would have given me an average speed of 42,21 km/h and a race time of 4:16, two minutes faster than the fastest bike split by Jan Raphael.

Of course, this is just a play with numbers. I was not able to perform my potential on race day and did not ride 4:16, but 4:28. Yet, it does show the importance of good aerodynamics.

In a world where (expensive) equipment has too much focus, it is important to add that good equipment cannot compensate for lack of training. Prioritize training, recovery and nutrition first. While that is my recommendation I am not going to lie. If you believe that you can buy yourself “free speed”, that is absolutely correct. No matter what your bike speed is, good aerodynamics will get you from T1 to T2 faster.

Note that my calculations are not without uncertainties. Error in watt measurement is obviously one, and the effect of group riding is another. My general observation is that my Polar power pedals give accurate and repeatable measurements when compared to the watts on my Wahoo Kickr. Regarding group riding I can assure you that I rode the 180 km solo and did not get any positive effect of being 12 m behind my competitiors. Wind is also quite a big factor, but it was weak and since we rode in a circular lap we got it both from behind and against.

I don't know if compression boots actually works in terms of performance, but they really feel good after a long run 🦶🏼😃